It’s been quite a year folks as we have just started grinding the cogs of our musical life on the road again after last years shinanigans involving several unfortunate events, they say it makes you stronger and at the moment we’re starting to believe it.
After our short run in Europe where by fate or the luck of the Aus/Irish we found ourselves a great manager in 2013. In Australia in Jan 2014 aptly named the fighting fit tour we were already getting the creative juices flowing for the next album named “Do Tell” which is out through out the world except Australia (which will be later in the year).

Fitzy in the meantime had been asked to write a piece on Tim Winton’s short stories which has been made into a fillum (film) directed by Australia’s up and coming Justin Kurzel who wrote the award winning movie “Snowtown” if your looking for an edgy dark and twisted movie this is possibly as good as they come. Not only did he write the soundtrack for the “Boner McFarlins Mole” he actually plays in the ending scene – Spot the Fitzy!

The track is called “Long Dark Cloud” by Hat Fitz this is also on the new album which was recorded and engineered by the great Jeff Lang, another real learning experience watching the wizard at work. It is such a breath of fresh air where you can be fully in your natural environment and feel free to express yourself without holding back.

We were also invited by Geoff Trio to the East Coast music awards showcase in Canada where we were to represent the Australian music along with a young talented Aussie singer songwriter Dylan Wright. There were over 200 delegates from all over the world in this beautiful spot called Prince Edward Island. We landed in 2 feet of snow which was amazing seeing Fitzy had never seen snow before so of course like big kids we had to have a full on snow ball fight but we had to pull it up before his hands froze off and thankfully there were no tears.

We met so many amazingly kind people there – Kev and Steph Corbet greeted us with open arms and warm yummy broth and then we were collected by the wonderful Lyann who chauffeured us around like Miss Daisy – what a champion. We had the beautiful Chloe Goodyear from Woodford Folk Fest fighting our corner valiantly not to mention the fantastic managing directer who set up AUSCAN  Shelley Nordstrom with their powerful team of Canadian delegates.

2:30pm came and it was our showcase – we were overwhelmed with the crowd as they had to open up the other half of the doors to let more people in. To top the whole show off we received the first standing ovation ever at the ECMA. Still feeling such a buzz from the whole experience, and thank you so much for the encouragement from everyone including all our friends family and fans you have made 2014 already a great year!
Cheers n safe on yer way
Hat & Cara 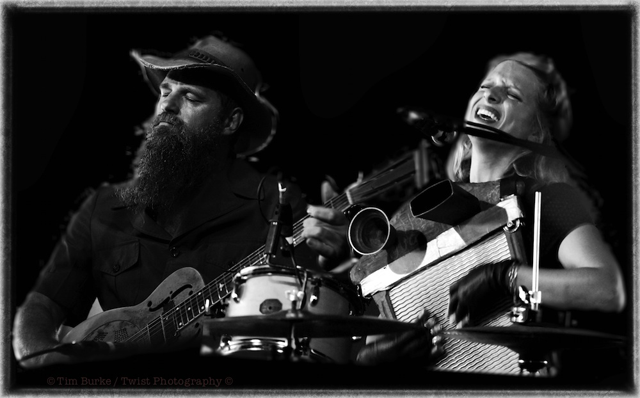